In January 2017 Elemental Impact Founder Holly Elmore visited Cuba on a family vacation cruise with three ports of call: Santiago de Cuba, Havana and Cienfuegos. As Americans, the visit was through the People-to-People Visa program with required Authentic Cuban Experience Tours at each city. The tours were well orchestrated, educational and led by delightful Cubans benefiting from the emerging tourism industry.

Santiago de Cuba was the perfect inaugural port as the education spanned the days of Jamaican pirate invasions to African slavery to the first action in the Cuban Revolution. The stage was set to appreciate the tours in other Cuban cities.

The cruise itinerary included two phenomenal days in Havana, filled with comprehensive tours of Old Havana and beyond. With the port literally across the street from Plaza de San Francisco, a walking tour of four of the five Old Havana Plazas was a perfect introduction to the grand, elder city.

Though fun and educational, the government-run tours herded tourists through the Old Havana Streets causing crowded conditions. In the tourist zone, the Cuban entrepreneurial spirit was evident and inspiring. Rather than begging for money, the enterprising Cubans used their talents to earn tourist dollars (or CUCs). Talent ran the gamut from superb musicians, excellent mimes, dogs in clever outfits to eclectic individuals dressed in character with over-sized cigars. Amazing for-pay photo opportunities were abundant!

A vibrant urban garden replaces the ruins of a dilapidated building.

The Cuban government is committed to authentic restoration of the once elegant Old Havana buildings that fell into complete disrepair over the past 50+ years. When practical a building is restored with similar materials & style as its original design.Examples of the impressive Old Havana building restoration were prominent within the tour.

Per the July 2015 Tourism, Historic Preservation and Urban Renewal: The Case Study of Old Havana published on the Urban Sustainability Laboratory Blog:

Habaguanex, a Cuban corporation that works with the historical and cultural product in Havana, was created to take over all publicly owned businesses in the region, partnered with The Office of the City Historian to redevelop Old Havana. Habaguanex invested in hotels and restaurants in Old Havana and redirected the profits generated from the investments towards historic preservation in the municipality. Sites like the central plazas (Plaza de Armas, Plaza de la Catedral and Plaza San Francisco), and places with the potential for tourism like Earnest Hemingway’s old residence have been restored, in addition to the ongoing restoration of aging buildings in order to maintain Havana’s architectural heritage.

Habaguanex investments led to an increase in tourist related business and employment for local residents. … Political reforms in 2010 allowed for specific openings to the private economy, and residents who own businesses in Old Havana often work in the tourism trade and make substantially more than those who are employed by the state.

Built in the early 1600’s as a mansion, the Hotel Santa Isabel Old Havana opened in 1997 following a major building restoration.

In 1994 the Cuban Council of State created the Habaguanex in response to the famous 1993 Old Havana building collapse witnessed by a British journalist. The same evening another building collapsed along the Havana Malecón (officially Avenida de Maceo), a five-mile walkway along the city’s waterfront. The Independent October 1993 article Architecture: Walls came tumbling down: Jonathan Glancey, our man in Havana, finds one of the most beautiful cities in the world crumbling under a US trade embargo documents the building collapse along with related commentary.

In the Human Settlement Development, The Central Role of Cities in our Environment’s Future Constraints and Possibilities, Volume 1, University of Chicago and Centennial Visiting Professor, London School of Economics, USA Saskia Sassen documents the Habaguanex launched with a mere $20,000 in state financing. As one of the few Cuban entities that retains most of its profits for program projects, the Habaguanex may form joint ventures with foreign capitalists for historic preservation within Old Havana.

Additionally, the Office of the Historian of the City of Havana (OHCH) assesses hotels, stores, museums, and restaurants a 1 percent tax, 60 percent of which goes to the OHCH restoration program and 40 percent to social work. According to the February 2017 Cuba Sets The Example For Historic Preservation article by Anne Surchin:

The revenue tax for OHCH not only funds the restoration work but also the salaries of a staff of 200 including a team of architects, sociologists, historians, environmentalists, geographers, civil engineers, and supporting specialists such as cartographers, computer technicians, archivists, and transit and traffic engineers. The office is 90 percent female. OHCH also runs four restoration schools providing training in 12 different trades for students between the age of 18 and 25. Graduates of this program receive certificates as restorers in a specialty trade. There are 13,000 restorers working for OHCH today. 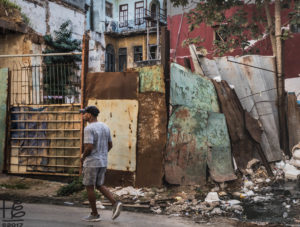 A typical street corner in a non-tourist section of Old Havana shows a city in disrepair, yet rich in life and spirit.

Even with the restoration commitment, there are dilapidated neighborhoods filled with memories of Havana’s pre-Castro grandeur; families live within the near ruins. The scenario is astonishing yet the folks are cheerful and seem content with their lifestyle.

With a basic understanding of Old Havana’s layout from the walking tour, Holly spent her “free” afternoon exploring beyond the tourist zone. It was stupendous to stumble upon prior mansions and grand buildings in unbelievable disrepair.

Doorways, stairs & windows are entryways into the unknown where memories often remain within their untold stories. Old Havana was filled with an array of eclectic entryways, often in disarray, that whispered of another era where opulence was common place.

Another common sight within the Old Havana neighborhoods was thriving plant life whose roots were grounded within buildings, whether ruins or restored. The vibrant plants echoed the resilient Cuban spirit. Despite obvious hardship, the neighborhood was filled with an optimism woven within daily life.

A classic, working car awaits its faithful owner at a popular tourist brewery.

Classic 1950 American cars are one of Cuba’s trademarks. Though the cars are meticulously maintained, most engine parts, or the entire engine, are other than American-made due to the trade embargo. Thanks to the Cuban entrepreneurial spirit, the cars are vehicles to funnel tourism dollars to support families.

Once out of the tourist zones, there are plenty of older cars in good working order yet rust, instead of shiny wax, define their character.

Old Havana is filled with a strong feline and canine population who calls the streets home. Filled with the resilient Cuban spirit, the cats & dogs are friendly and loved by fellow human residents within their territory. It was heartwarming to witness a neighborhood man reach down to pet a street cat as he continued his daily routine. 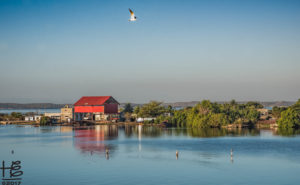 A stunning morning view welcomed the cruise ship to Cienfuegos.

The final port-of-call was the delightful city of Cienfuegos. Nestled on the Caribbean Coast, the rich artist culture permeates the city and enriches the experience. It was interesting to note Cienfuegos appeared free of the dilapidated neighborhoods prevalent in Havana. The city seemed grounded and centered with a more moderate lifestyle during the pre-Castro times.

As an island originally colonized by the Spaniards after Christopher Columbus’s discovery in October 1492, Cuba is a country who arises from dominant foreign rule. In Santiago de Cuba, El Morro – formerly Castillo de San Pedro de la Roca –  is a fortress built in 1638 at the Santiago Bay entrance to protect the city from pirates; the fort remains a prominent reminder of necessity to protect from foreign invasion.

Though the current economic state was driven from within, Cuban tenacity of spirit will sustain the fundamental restoration necessary to restore its rich heritage. A work-in-progress, Cuba is indeed rich in spirit, history and restoration.