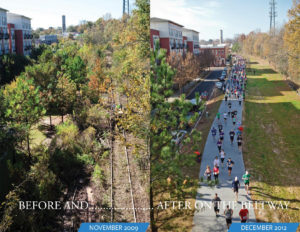 The American Society of Landscape Architects (ASLA), presents the Olmsted Medal at its yearly Annual Meeting.  The medal honors the work of Fredrick Law Olmsted, considered the founder of the American landscape architecture profession and steward of the environment.  It is given to individuals and organizations outside the profession of landscape architecture for environmental leadership, vision and stewardship.

Fredrick Law Olmsted was the creative force behind Central Park in New York, and several other urban parks throughout the United States.  At the onset of the industrial revolution, he recognized the need for urban green space as a way to improve the health and well being of people living in cities.

The Atlanta Beltline is a redevelopment project creating a 22-mile trail and streetcar system from abandoned railroad corridors surrounding Atlanta.  The project’s trail and streetcar system will connect 45 different neighborhoods with 1,300 acres of parks and public art.  When completed, the BeltLine corridor will have set the stage for $10-20 billion in adjacent economic development.  This investment will result in the creation of a total of 48,000 construction jobs and 30,000 permanent jobs while also providing 5,600 units of affordable housing.

In addition to the economic benefits, the BeltLine’s focus on sustainable development and green infrastructure will produce several environmental dividends for the city of Atlanta.  It used green infrastructure principles to turn Fourth Ward Park into a vibrant public place that improves the quality of urban storm water runoff.  It implemented the use of organic land care and maintenance techniques along the 22 miles of trails and parks.  When completed, the BeltLine will also have participated in the environmental remediation of 1,100 acres of brown fields and the preservation of several historic sites.

“We all know of the emergence of the profession of landscape architecture in America through the early efforts of Frederick Law Olmsted whom this medal honors. Olmsted’s efforts came as a response to a rapidly changing America besieged by the Industrial Revolution where human health and well-being were cast aside along with the rural, agrarian lifestyle. America was transformed and when we arrived and took possession of our cities, they weren’t pretty places. Olmsted’s efforts changed all that ushering in a new way of viewing urban life. Of significance were Olmsted’s efforts on behalf of the City of Buffalo where we were introduced to America’s first ‘park system’. This, of course, was a radical departure that, again, fostered a new evolutionary trend for our cities. 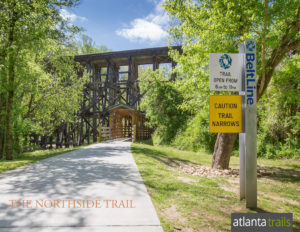 It is in this spirit that this nomination is being put forth—because of its multi-faceted, systematic approach to enhancing urban life through the purposeful re-purposing of abandoned transportation corridors linked to all sectors of the City of Atlanta. Their efforts represent a classic case of the concept of the resilient and evolutionary city of the 21st century. The linkages and threaded connections to all parts of the city have incentivized redevelopment efforts and advanced the causes of parks development, urban revitalization, access to multi-modal transportation, business growth, environmental enhancement/healing, adaptive re-use of land, and placement of public art.”

Congratulations Paul on the high honor bestowed by American Society of Landscape Architects!