Topic: Engaging communities to activate the Power of Parks.

Michael talked about the mission of Park Pride; “To engage the community to activate the power of parks.” Park Pride mission serves the parks within the city of Atlanta and DeKalb County.

He educated our audience on the power of parks which goes beyond recreation and relaxation as they often serve as the city’s lungs transforming carbon into oxygen as well as the city’s water sponge mitigating stormwater quality and flooding issues, to name just a few additional assets of parks. Parks also play a social role providing equal access and diversity connectivity for all the citizens who use them.

As our city population grows in number and affluence people are beginning to take ownership of the parks in their neighborhood and city.  Which is a good thing as our Parks need our help.

We learned that the city of Atlanta ranks 50th out of 100 top us cities in terms of their park system. Up one from last year at 51t by the same rating system.

Some of the major issues:

5% of our land is dedicated to parks which is below average.

To Michael, some of the shiny examples of parks improvement in our region include the Beltline and the city of Roswell river walk. My wife and I have personally benefited from both of these venues for great strolls and fun bike rides. The contrast of the urban park and the Nature walk provide us all with amenities other communities would love to have and continue to build the Atlanta brand.

We also met Stephen Causby who is up for an award for his community efforts in west Atlanta working with his neighbors to use parks as a major revitalization tool bringing a diverse underserved neighborhood together. They are doing amazing things with abandon property and preserving homes of long-standing community activist to turn the tide in a way respecting and engaging the community at every step. 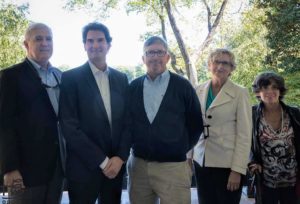 In addition to Bill’s meeting notes, The IMPACT Blog article, The Power of Parks, chronicles the history of public parks, the substantial value of parks on many levels, ParkScore park rankings, and Park Pride’s impressive work supporting parks in Atlanta and Dekalb County.  The LAI Atlanta Fall meeting is featured along with an LAI overview; the Elemental Impact FB album, Lambda Alpha International, includes a pictorial recap of the fall meeting.