LAI Atlanta Chapter member Paul Morris was selected to spearhead the feasibility study to build a park over the I-75 | I-85 downtown Atlanta connector. The effort is led by Chick-fil-A CEO Dan Cathy and strongly supported by the Georgia Institute of Technology. The Atlanta Chapter is thrilled Paul continues to reside in Atlanta where he is an active chapter member. 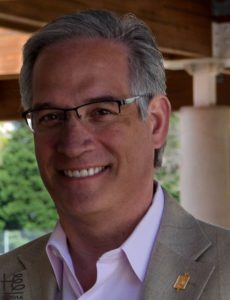 An ambitious plan to cap the Downtown Connector has brought on a central figure in Atlanta’s recent explosive growth.

Former Atlanta BeltLine Inc. president and CEO Paul Morris will conduct a feasibility study to build a park over the connector that could link Midtown with the heart of Georgia Tech’s campus.

Cathy has spearheaded major urban plans before, such as the revitalization of the historic Westside neighborhoods.

“Atlanta has always been about big ideas,” Cathy said in an email to Atlanta Business Chronicle. “Right now, we can just do some learning to determine if it’s worth pursuing. We’ll want to hear from a lot of voices.”

In a Sept. 5 interview with Atlanta Business Chronicle, Morris said he was hired by Cathy to study a possible park over the interstate.

“We are right at the beginning stages,” Morris said in a telephone interview.

It’s too early to know the cost of capping the Connector through Midtown, though it’s likely in the hundreds of millions.

Building a park over the Interstate likely would be a public-private partnership. It’s uncertain how much Cathy would be willing invest in the overall project, but he’s committed to the initial funding, Morris said.

“What we have to figure out is what is feasible before we can know what it will cost,” Morris said. “There are probably going to be multiple alternatives that will come from that.”

First priorities are an environmental and engineering analysis, and “then we can consider the cost and what do you get for your dollars,” Morris said.

The project joins two other similar efforts underway in Atlanta. Downtown, “The Stitch” would build a three-fourth-mile platform over Interstates 75 and 85 from the Civic Center MARTA station to Piedmont Avenue. Its price tag is $300 million. In Buckhead, a proposed half-mile long park would cover Georgia 400. It may cost at least $190 million.

Neither project has secured that funding.

In Boston, the “Big Dig” megaproject soared past $15 billion.

Morris is no stranger to big ideas. He was president and CEO of Atlanta BeltLine until last year, when he left under fire from former Mayor Kasim Reed after the BeltLine struggled to meet its affordable housing goals.

The BeltLine, one of the largest urban renewal projects in the United States, is a 22-mile former railroad corridor that encircles the city. Completed sections such as the Eastside Trail have evolved into a powerful catalyst for economic development. The project stands at the center of debate about housing affordability and transit expansion – two of the biggest issues facing the city.

Morris has said the Beltline gives Atlanta something unique. A park connecting Midtown’s Technology Square with the Tech campus could add another defining project to the city.

The project could build on the momentum of Georgia Tech’s decision an 18 years ago to expand the campus across the Connector and into Midtown.

Now known as Tech Square, it’s a hub for research and innovation, a powerful magnet for headquarters relocations such as NCR Corp., and corporate expansions such as Anthem Inc.’s 21-story office tower. It could also serve as an important connection to Tech’s campus and booming areas around the school such as West Midtown.

In an email to Atlanta Business Chronicle, Georgia Tech President “Bud”
Peterson said, “The past 10 years have seen explosive growth in Technology Square, largely due to the rapidly expanding innovation and entrepreneurship ecosystem. The influx of a number of innovation centers coupled with the talent and technologies at Georgia Tech are continuing to draw attention and make this area highly desirable for large companies and startups alike. As a result, real estate values have increased dramatically, and space is at a premium.”

The plan to cap the Downtown Connector may draw inspiration from the five-acre Klyde Warren Park in Dallas, which built a park over the Woodall Rodgers Freeway. In fact, there may be up to 30 similar projects across the United States, many that became catalysts for real estate investment and economic development. “There are case studies from other cities,” Morris said.

Cathy has been holding meetings with stakeholders about the project. He recently pitched the idea in a meeting to Georgia Economic Development Commissioner Pat Wilson and Department of Transportation Commissioner Russell McMurry.

The upcoming study, which could take up to three years, is meant to be inclusive and transparent, Morris said.

The process will involve public feedback.

“We are going to be open,” Morris said. “At the end of the day, they could conclude there isn’t a good fit.”

Morris said he was honored to be brought back into the conversation about projects that can shape the city’s future.

“I’m a huge supporter of Atlanta,” he said, “and I have great confidence in the community’s aspirations to think and act big.”

Note: The Connector image is courtesy of the Atlanta Business Chronicle.